How Do You Organize a Virtual Conference across Different Time Zones? 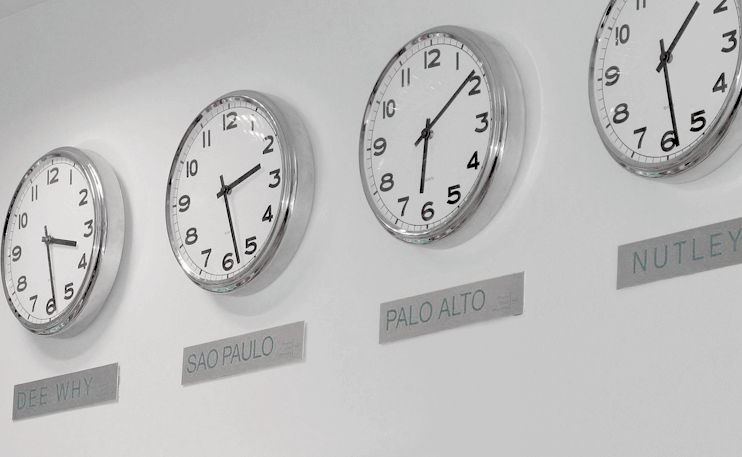 Organizers have a timing issue – and this doesn’t refer to the usual problem of not having enough time when planning a conference. As organizers switch to virtual events, a whole new complication arises: Participants are now no longer in the same place and can log in from anywhere on earth. But to do so, the conference needs to take place when it suits all time zones. Is something like this even possible?

Given the many advantages virtual conferences have for everyone involved – participants save themselves the long journey and organizers can sell many more tickets – organizational time zone hurdles may seem insignificant. However, almost everyone has to keep the time zone issue in mind. The only exceptions are conferences whose participants are all in the same time zone or when you can be sure local times only differ slightly. But once the conference goes virtual, there’s no way for you to tell where someone is logging in from. The boundary between national and international events has become more and more blurry as someone from New Zealand can now sign up for a German-speaking conference, too.

When last year’s most pressing problem was to just somehow find a way to make the conference happen, organizers largely relied on the simplest and most obvious solution: Selecting the time zone of the place where the conference would have taken place under normal circumstances – similar to a live world championship in sports which will only be broadcast once. That wasn’t the most convenient solution for people hailing from other time zones but most of them were perhaps able to come to terms with it because their everyday lives were turned upside down as well. But now that the range of virtual conferences has become larger and more varied, and organizers are at the same time taking a less pragmatic-experimental approach to planning events, time zones should be given more consideration.

Organizing a conference often means estimating numbers and building upon previous experiences. Especially if it‘s a conference series, planners often refer to the data and experiences they have collected over the years as that’s the somewhat safest way to say where attendees usually come from. As mentioned earlier, however, this is now starting to change.

So how about just giving a date for the conference first and only specify fixed times once it’s clear who will be there? Most people will reserve the whole day for the conference anyway, and there is no need to consider travel times. Still, it‘s helpful to tell (potential) participants right away whether a conference day will last five or ten hours. You should also explain that you will wait to set the exact start times for a while in order to make participation in the conference as pleasant as possible for everyone interested.

Which Time Zone Is Going to Win?

Then, take the time zone where the majority of the participants are located in and set the conference times accordingly – or not?

This would indeed be the least complex solution, but only a justifiable one if there are not more than a handful of participants from other parts of the world. Time zone-specific adjustments always require additional considerations and quite a bit of effort, even for organizers. To find a compromise, make sure that the conference doesn‘t start at 3 a.m. for anyone, if possible. You can usually find much better times – ones that might not be ideal for some, but still won‘t clash too much with their regular daily schedule. No one should need to schedule night shifts in front of their screens.

Time zone planners can help you find appropriate times. Select the participants‘ time zones to get an overview of all times and see how the time shifts look in detail.

A conference that has a live program is always nice, but that doesn’t mean one with pre-recorded presentations is bad. You don’t have to broadcast every session live if there are other ways of engaging participants. If you‘re using a platform for your virtual conference, you will have multiple ways to do so. For example, questions can be asked for each video presentation which will then be answered by the speakers, and the speakers can be contacted directly via the platform in order to arrange a personal 1:1 meeting, or participants can discuss the content among themselves by using the chat feature. With virtual conferences, it is easy for someone to miss a session or two. In this case, the person should always be able to quickly return to the conference and get in touch with others.

Organizers can also solve the time zone issue by combining synchronous and asynchronous parts of the program. This was implemented at the University of Applied Sciences and Arts Northwestern Switzerland’s Kongress zur Begabungs- und Begabtenförderung (IBBF) that dealt with gifted children education and took place in mid-January. Among the participants were teachers who aren‘t always available on weekdays as well as experts from the US. Although there was a fixed schedule containing live presentations and some pre-recorded workshops, most of the program was available as a recording for several days afterwards, so that everyone had enough time to follow the congress. Participants could also download the presentation slides via the Virtual Venue conference platform.

With a similar approach, the German Society of Periodontology DG PARO held its hybrid 2020 Annual Meeting. Upon the start of the meeting, all pre-recorded presentations were available in the Virtual Venue, and were followed by a live day, the second part of the program. A limited number of participants were able to enjoy the rare opportunity of experiencing an on-site conference where they could take part in an exclusive hands-on course or attend live presentations that were streamed to the Virtual Venue so that attendees logging in from home could also access them.

Alternatively, the conference could be held as a virtual live event entirely – and then be available in full as a recording. There is, however, a small risk involved because the live stream might attract far fewer people (from other time zones) which could cause the accompanying discussions to be less extensive.

Dividing the Meeting into Smaller Segments

The software conference RecSys developed an interesting system for its virtual 2020 event: The live conference program took place at a set time – and was repeated in full eleven hours later.

The visualization is perfect for creating your own schedule as a participant: The sessions highlighted in red are more suitable for night owls and at the same time work as a sign for everyone who is more active during the day to switch to the alternative run where the same session is highlighted in green.

That way, a London-based participant was able to finish at 10 p.m. and log in again at 9 a.m. the next day to continue instead of having to stay up until 2:30 a.m., but the latter would have been possible, too, because everyone has a choice and can make their own decisions which is the major advantage of this concept.

As soon as there’s more than one time slot for a single session, all of them should appear in the schedule. It is not sufficient to indicate only one starting time and pointing out that there will be a re-run the next day. Participants would then have to find the other starting times themselves and convert them to their time zone which is tiring and prone to error, especially with complex schedules.

Currently, this model seems to be quite popular among many organizers. At ECML-PKDD 2020, a conference on machine learning and data mining, presentations were held twice with a twelve-hour time difference between each run.

You don’t have to be part of a software conference’s team to find a good approach to bring international participants together. One idea worth mentioning came from the U.S. Grains Council. For two international conferences, people in the same or similar time zones were grouped together for some of the sessions.

In the morning (referring to EST, the Grains Council’s local time in Washington, D.C.), attendees from Central and South America, Canada, Africa, the Middle East and Europe exchanged their ideas. For those located in Asia, sessions were held in the evening hours.

Despite different time zones, the conference can maintain its usual or originally planned scope. However, we recommend you to divide the program into several smaller segments taking place over multiple days. This makes it easier to coordinate the program across different time zones. If there’s just one nine-hour-long conference day, some of the participants will probably tune out way before you’ve reached the end. Keep in mind that in most cases they will be sitting alone in front of a screen, just virtually moving from one session to the next. A few hours in, this becomes exhausting and can make you tired no matter how varied the schedule is.

That won’t happen if you spread the nine hours over two or three days. Even if someone is unable to stay for an entire day, it is much easier to make up for the missed time or, as an organizer, to coordinate the different time zones. Otherwise, a nine-hour conference day will always result in disadvantages for some people, for whom a part of the program will slip into the red zone of time slots that just don’t work for them, which you should avoid whenever possible.

Do you know of any other ideas for planning meetings across multiple time zones? Which approaches do you think are appropriate and which aren‘t?